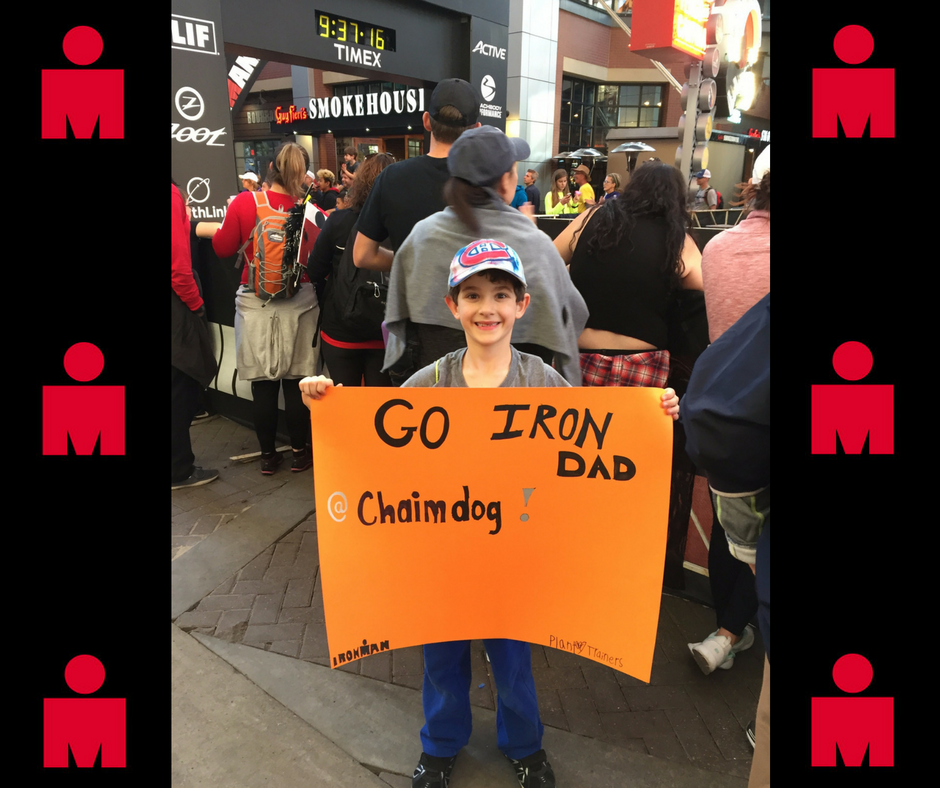 Last week Adam wrote about his race experience at Ironman Louisville. It was a raw review of racing his second Ironman. He talked about expectations, experience and emotions. For the 3,000ish participants, I’m sure there are parts of his story they can relate to. But everyone has their own story.

Then there are about 10,000 other people. The sherpas, the partners, the children, the parents and the friends. Those stories are SO different and again, each unique.

Ironman Texas #IMTX in 2014 was amazing. It was fun. It was hot. It’s where Adam first became an Ironman! Was it bucket list? Was it the new lifestyle? Who really knew. All I knew is the months of training paid off. He did it…and his time was great. 12:37. Not bad for a dude who could not swim 25 meters just two years before.

So when Adam announced in August that he wanted to do #IMLOU about 11 weeks later, well I had a song stuck in my head “Here We Go Again” by Whitesnake. I was supportive. I wanted him to do it. But I know what it meant. Early mornings, early to bed. A ton of food preparation. Amazing training sessions. Possible injuries. Emotional reactions. And I guess a bit of FOMO (fear of missing out) for myself.

We drove down to Louisville, which is about 10 hours from Toronto. Never a good thing for an athlete to be squished in the car for so long on a race week. But we had all day Saturday to walk around, get checked in, stretch and relax. And the most exciting part was that our 8-year old son, Russell, came too and would be able to see his daddy become an Ironman, again. 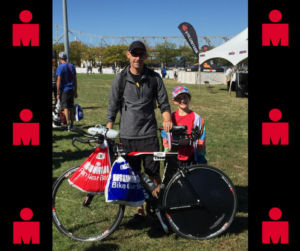 From the second we got in the car to leave, to checking into the beautiful hotel, to shopping at the official IM store, to bike check-in, I tried to have a smile on my face. I wanted to be positive. Do as much for Adam as I could to make sure he had a great race. I went to the grocery store and made his pre-race dinner in the hotel. I brought with a rice cooker and steamer. Dinner is always: rice, ginger, onion, mushroom, and some greens topped with some Tamari. I got the boys into bed early and did not show my fear or my worries.

Race day, and much of the training, is nerve racking for a spouse. Especially one who likes control! There are so many unknowns. So many ways you want to help. We had made it through the training, that’s half the battle.

5:00 am transition set up in the cold and in the dark. Standing and sitting in line for over an hour waiting for the start, with your teeth chattering and no Starbucks anywhere to be seen. Planning and calculating times, distances and locations to make sure you see your racer as often as possible is the only thing keeping you from falling asleep sitting up. And poor Russ. He was so cold. Adam was calm and confident, getting in his groove. 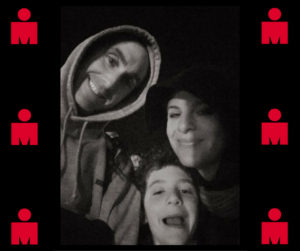 Once 7:30 came and the racers began to jump in the water all the worries, fears and unknowns became excitement. From a supporters point of view, we had a great day.

We actually saw him jump on the water. Russell spotted him exiting the water.  We saw him leave on his bike and we got a chance to rest. Wow. That first 1 hour and 5 minutes happened fast. And we saw as much as we could!

The cool part was talking to other people. People with young kids. People with similar experiences. The volunteers, they were all so kind and special!

After a quick rest at the hotel we visited the Louisville Slugger Museum. Russ loved that. I was constantly checking the stats on ironman.com to see Adam’s splits. He was killing the bike and after his amazing swim, I thought he would PR the race. Not knowing how quickly the website really updates and how much time we had, we scooted over to the end of the shoot to see Adam run out from after the bike portion. We found a great spot with enough shade to have a big snack (ooops, no time for lunch) and play some catch. We waited…waited and actually ended up thinking we missed him. How could he have taken that long if he was killing the bike portion? 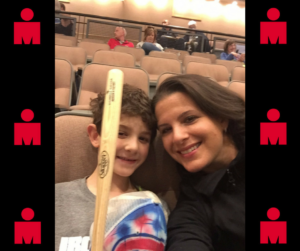 Missing your Ironman is a sinking feeling. You came all this way – you want to see him – know he’s ok – encourage him and smile. Don’t even think of giving anything as small as a lipbalm and don’t get on that track with him or he can get disqualified. All that training and money would be gone.

Anyway. I decided to wait a bit, to see if maybe the tracker said he came in but he was still in transition. And there he was, with his Amrita shirt and white beanie. Sexy shaved legs and all. “Wooo Hooo. GO Adam! (cowbell noise) How you feeling!?”

Never something you want to hear. When you are not good and you have a marathon, 26.2 miles, ahead of you, that’s not good. And there is no way to get details, know what that means or if something happened. That feeling of helplessness is just not cool.

Waiting for him to make his way to the half marathon spot was brutal. I could tell by his splits he was walking. Or so I hoped. Officially, according to the rules, you can run walk or crawl. So hopefully he was not crawling! I did not know if he had stopped. I know it’s not in his nature to stop, but if he had to, he would. And at this time, almost 6 PM, Russ was done. We had been up since about 4 am. It was hard for me to have the energy to keep both my boys going. But the cool thing was hearing people go through the finish line one at a time just around the corner from our post…they were starting to trickle in. The first woman. Two men sprinting their own little race. The vibration was super cool.

A woman came walking around the bend. She stopped. Looked around. Caught her breath. What came next was heart wrenching. She found a volunteer and told them she was done. She wanted to stop. They took off her ankle time chip and she was done. It was like all of us spectators took a big inhale at the same time and then we all felt a little tear in our eyes. We KNOW what she went through to get here. It was sad. But good for her for stopping before something bad had happened. I was still hoping Adam was ok and hadn’t stopped himself. 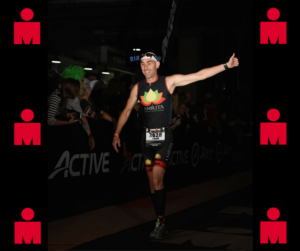 Then finally! He was there. He smiled, he held his leg, came over to us and said “this is going to take a while”.

That was fine. Taking a while was ok as long as he was not permanently hurt or dehydrated. A PR was out, but at this point you just want the finish. You want all the training, all the planning, all the brainpower to get you to that goal.

It’s funny. There were probably about 10,000 people there that day, but you keep running into some of the same people over and over. And then there are others you talk to for a while, never get their name, and never see them again. I find that fascinating. I guess I’m kinda geeky that way.

We went for our second Starbucks run of the day and waited. We know we had a while and I actually closed my eyes for a few minutes. That felt good. Then I met a lady, Amanda, for a second time and we got to chatting. Before we knew it, we noticed the website wasn’t working properly and timing was off. Her husband was only a bit behind Adam at the half marathon point and we had NO idea how fast they were walking or running. So we made a mad dash sprint to the finish. I swear. Watching an Ironman race could be as mentally exhausting as racing it.

Finding a spot was hard. Russ was able to sneak his way to the front. I wish I had brought a step stool. (Note to self: bring collapsible step stool if there is a next time.) 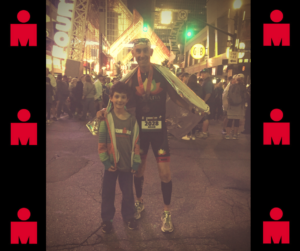 his is the good part. The cheering. The people. The announcer. Racers giving high fives. People coming in like they’re airplanes. The smiles, real, genuine overjoyed smiles. Racers kissing their spouses. People of all ages, races and sizes. People with different stories. Racers crying. Spectators crying. People literally falling to their knees when it’s over from pure exhaustion. We all know what went into making it to that Ironman red carpet, the finish line, the “Jumbo-Tron”, the medal, the finisher’s shirt, the hat, the energy, the emotions and the exhaustion. There is really no explaining how it really feels to be there.

I thought I had seen him about a dozen times. And then finally, it was finally him. Still walking. No extra push for a run. I knew he was hurting. But he made it. He was safe. No hospital. No ambulance. Another finish. Another accomplishment. Success.

The rest was not sexy. Bag and bike pick up. Gear clean up. Stinky clothes. Two tired boys. But that’s not the important part.

I’m so grateful to have had this experience and have Adam as a role model for our friends, family, and children. I can’t wait to see what’s next. 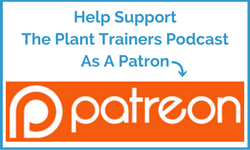 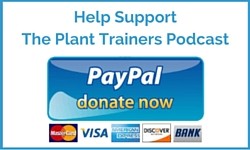 Do you want to create lifelong healthy eating habits for you or your family? Are you looking to help prevent heart disease, cancer and chronic diseases? Are you looking for guidance with your plant-based nutrition? We can help. If you are serious about getting results, you may be eligible for a FREE 30-minute Skype or phone consultation, where we can help you with your goals NOW. Easily book your session HERE. 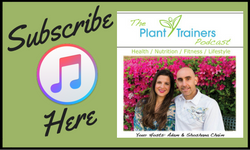 We hope you enjoyed this podcast! Please take a moment and leave us a rating and review over on iTunes – we would be grateful! This will help get our podcast out to others who may enjoy it. We promise to read your reviews and consider your feedback. This show is for you.

Please subscribe to The Plant Trainers Podcast on iTunes, Stitcher or Player.FM so you will know when we release a new episode. Now also available to Listen on Google Play Music! 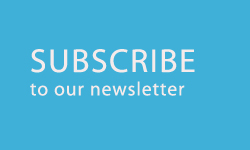 Tips for Transitioning to a Plant-Based Diet

I Am A Peaceful Goldfish with Shoshana Chaim – PTP404